What Happens if You Get in an Accident With a Delivery Driver?

The Importance of Car Insurance In Louisiana 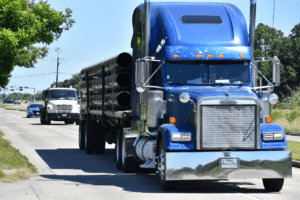 Why are 18-wheeler Accidents More Common in the Summer in Louisiana?

18-wheelers, a combination of tractor unit and semi-trailers, are a common sight along the I-10, the most dangerous road in Louisiana. These large and imposing vehicles are more prone to accidents in the summer in Louisiana than at other times of the year. It’s worth considering the heightened risks of the road as you head out on your summer road trip.

According to the Federal Motor Carrier Safety Administration, there were approximately 499,000 crashes involving large trucks throughout the United States in 2018, of which 1% were fatal, and 21% involved personal injuries. Louisiana is not exempt: the 2019 Louisiana Traffic Records Data Report suggests that of the 681 fatal crashes and 727 fatalities in 2019, large trucks (defined as the gross vehicle weight being over 10,000 lbs.) like 18-wheelers accounted for 9.3% of fatal crashes.

The number one reason that 18-wheeler accidents are more common during the summer months in Louisiana is increased traffic on the roads. As more people take vacations and are out on the road for recreational purposes such as visiting friends, 18-Wheeler drivers must navigate through intensified traffic on highways, potentially encountering tourists to Louisiana unfamiliar with local roads. The more traffic there is, the more likely it becomes that an 18-wheeler will be involved in an accident.

Among these increased drivers on local roads may be teens visiting New Orleans or Baton Rouge for the summer holidays who are inexperienced at driving. Typical teen behavior, such as being distracted by cellphones or their passengers, or getting behind the wheel under the influence of alcohol or drugs, renders them a threat on the road.

In addition, inexperienced drivers may misjudge the speed of a fully-loaded 18-wheeler and how long the truck takes to come to a halt. As a result, if teenagers happen to veer into the path of an 18-wheeler suddenly, the driver may be unable to stop in time.

The risk of being involved in an accident with a drunk driver increases during the summer because alcohol usage is almost twice as high as usual during this period. The most dangerous time is at night and in the early morning when people may be driving under the influence, and 18-wheeler drivers are still on the road delivering goods.